Aikido and the problem of grabbing, or playing with shopping trolleys

Aikido is a martial art which is famous, or perhaps infamous, for being taught initially by the attacker (uke) grabbing the defender (nage). Really this is artificial; one cannot afford to wait to be grabbed before acting, but it does form a useful start in understanding the interplay of force and energy between the two.

But perhaps an unappreciated problem is the consequences of nage grabbing uke. There are lots of times that this is essential; for instance when working with pins or weapons, but as with everything we need to be mindful of the pitfalls.

The “Grabbing too quickly” problem

There are techniques like ikkyo (let’s say as a response to shomen uchi) where grabbing the opponent is an essential part of the recipe. But even here grabbing can have its problems. If for instance you grab uke’s arm immediately it can.

The easiest way to avoid this problem is to resist the urge to grab, wait for the attacker’s arm to be delivered to your open palm; keep your hands so that they are a barrier between you and the attacker but allow rotation of their arm until the technique ends on the floor.

Not everyone thinks this hand positioning is a problem.

The “Push and Pull” problem

Often a person grabs someone else in the first place in an effort to control them; to keep them at bay or bring them closer to attack them. In aikido, trying to “control” the attacker is somewhere between unwise and anathema. The whole point of aikido is that it is hard to control another person and easier to control yourself by moving you. If you look again at the photograph just above, another reason why people end up in this position is that they see it as desirable. They can push on one side of the arm and pull on the other, using leverage to move the attacker. That’s bio-mechanically true, but perhaps problematic in terms of good technique.

A useful training perspectives is to be found with a super market trolley. When you are next shopping get a nice big, but empty trolley and be observant of the placement of your hands to move it. You will likely end up with one hand pushing and the other pulling a lot. Your hands may look something like the grip above. This is effective, especially when the trolley is empty.

When the trolley starts to fill you will feel increasing strain in this way of moving the trolley, potentially even into your lower back. In order to apply leverage you need a solid stance to use the reaction forces from the ground to apply force into the trolley’s movement.

By contrast, as the trolley fills up, you can still easily walk around it and move it with you. If you have both your hands facing away from you against the bar of the trolley, you will have to move in this way in order to move the trolley effectively. 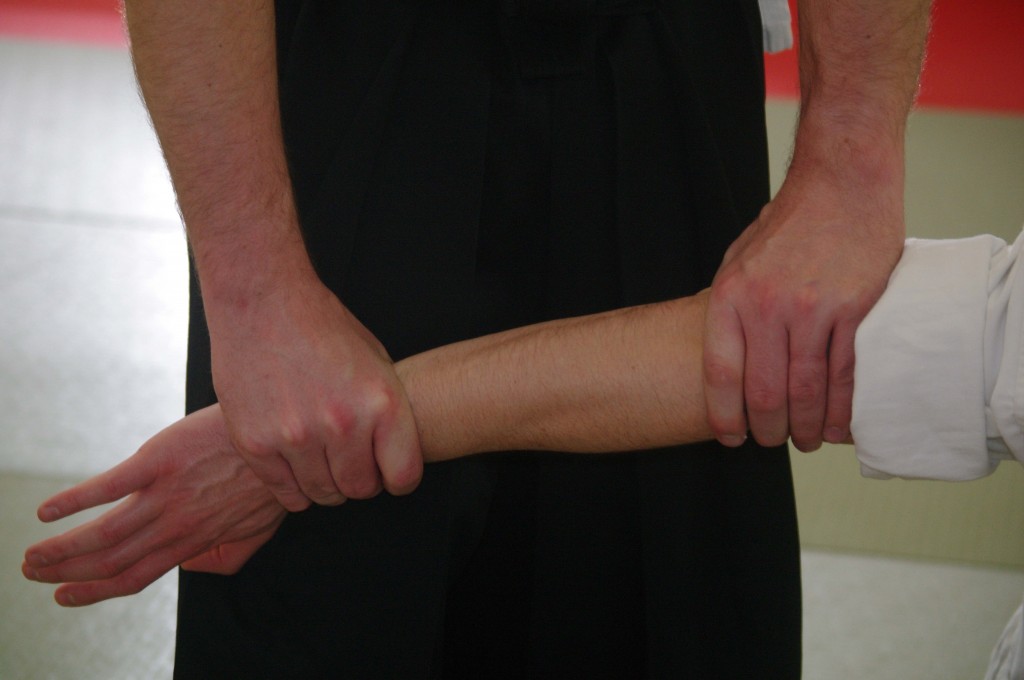 So, back to ikkyo, if we don’t grab the arm at the top, but wait for it, then when the grip becomes natural the hands end up differently positioned. Now both hands are between ourselves and the attacker’s limb. This is safer in the sense that it defines your personal space and evens up your posture. But the biggest difference is that the technique will no longer be achievable by simple leverage on the arm. You will have to complete the technique by moving you.

This is not to say that other approaches are not possible, or even correct, simply that this way promotes awareness of how much you are cheating. If the attacker is relatively small in comparison to you, you can manipulate him or her as an empty trolley. But if they are much bigger this approach is unlikely to work.

Above all the problem of grabbing may be the possessive instinct. You have decided to control the attacker. That means that you have decided to own them and make them your problem. You may also find when you grab someone you tend to pull them towards you – maybe only a centimetre but that small distance can make a big difference. A skilled attacker can take that space from you and you will not get it back.

In general, however, grabbing the attacker makes techniques slower, and in the context of multiple attackers even an extra fraction of a second can make a huge difference.

Gozo Shioda sensei once said that the control techniques (pins and locks) didn’t work but his books give much guidance on their execution. My personal feeling is that he may have meant they are foolish techniques to try from a “cold start”. Nage waza (throwing techniques) are faster and tend to at least tire the attacker more. If a pin “happens” naturally and without forward planning it is more likely to be successful, especially if the urge to push and pull can be overcome.

Henry Kono sensei has developed a number of useful exercises which are helpful for overcoming the grabbing problem.

One of these is for nage (the defender) and uke (the attacker) to practice throws with palm to palm contact and no grabbing. This requires generosity and common sense on both sides. But the idea is simple: if nage attempts to move too quickly, without the grab, the connection will simply break. Too slow a movement will be felt as heaviness in the contact.

This can be made more visible, audible and enjoyable with the use of balloons. Place a balloon between uke and nage’s open palms. Nage moving too fast causes the balloon to drop, too slow will cause it to pop. Squeaking rubber is also likely a sign of attempted manipulation.

And once you’ve done all this the trick is to the throw or technique with the normal grab but the very same feeling and sensitivity. If you work out how to do this flawlessly, please let me know, but at least you have experienced the fun of aikido and balloons, which is a reward in itself.

Thanks to Ludovic Le Berre and Mark McDermott for help with the illustrative photos above.