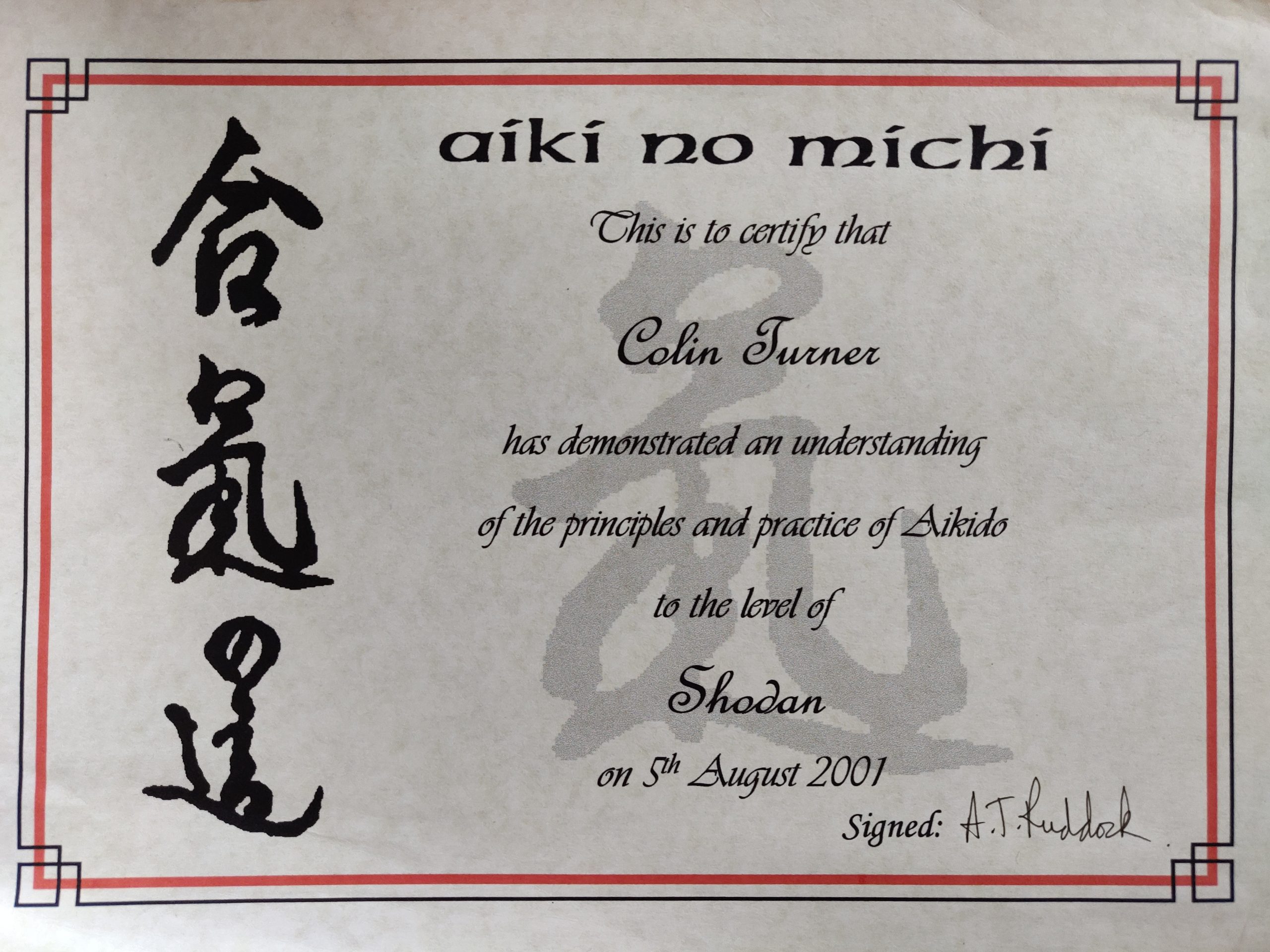 Today (5th August 2021) marks twenty years since I first graded to shodan (the first black belt grade) in a martial art. It might come as a surprise to many non martial artists that there are multiple black belt grades, and that a black belt does not represent the end of a journey but more of a proper beginning.

I dug out my shodan certificate recently when I realised this milestone was approaching. It was carefully stored in a filing cabinet since I’d taken it out of a frame when I replaced it with a nidan (2nd dan) certificate. That was a mistake, but probably born out of the circumstances.

I started training in aikido on the 16th August of 1999, with a bit of a rocky start, but eventually I built up some momentum and attended all the classes and weekend courses I could, taking up iaido as well at the same time. I was probably taking instruction from around six people in two martial arts, which generally was a good thing, as I learned that different people had different talents and approaches some of which my own personal style resonated with more than others.

In the August of 2001, I was at the Summer School of our Aiki No Michi association in Galway, intending to grade for 1st Kyu – which is the last grade before the black belt grades. My uke (partner) for the main part of the grading, was a gentleman I’d never met before but in much the same position. We were grading alongside those who were challenging various black belt grades and the late Alan Ruddock sensei led the grading, under the watchful eye and opinions of the late Henry Kono sensei. About half way through the grading, Alan made some comment that while he knew we were grading for 1st Kyu he just wanted to watch us for a bit longer. I can remember thinking that I couldn’t consider the possible implications of that and so I just decided to carry on as if it had not been said.

The grading continued, and eventually we each did our minute or so of multiple attackers, I think with six each. It’s something of a simulation obviously but there are real challenges in dealing with six people when you are already pretty tired and you’re trying to land each person in a safe spot.

Afterwards, as Alan announced the results I was stunned that he’d decided to award me with shodan rather than the 1st Kyu I was attempting, and I was in excellent company with many friends who had been grading for shodan that year. The result however, was that I had an even bigger slice of imposter syndrome than many people who first get their black belt. At the same Summer School I interviewed Alan and Henry, and when speaking to them about grading Alan made some comment about how when one gets to black belt you realise you still don’t know that much yet – and I feel he looked pointedly at me when he said it. It provided quite a bit of relief. I told myself many times that Alan had a choice not to award me shodan, but still the feeling of uncertainty persisted.

Just over a year later (18th August 2002) I obtained my shodan in Muso Jikiden Eishen Ryu Iaido in Leeds, England, under a panel led by the late great Nishimoto sensei, though Iwata sensei’s name is on the certificate. I remember that grading keenly – it was a very hot day and drips of sweat fell on the wooden floor when we bowed in at the start. That shodan certificate has stayed on my wall.

But when I got my nidan in aikido a few years later I replaced my shodan certificate in the frame. I think nidan had been important to me to reassure me the shodan had been legitimate, but in retrospect it was a terrible mistake to remove that shodan certificate from the frame and from the wall. Obtaining that grade from Alan Ruddock remains one of the most important moments in my life. So I have placed it freshly in a new frame to go back on a wall somewhere, and today will be a good day to do that.

Incidentally my yondan (4th dan) certificate in aikido signed by Anita Bonnivert sensei is on my wall, having seen Anita’s aikido I was very honoured to receive that grade, and I’ve just realised my nidan (2nd dan) in Iaido (from Stephen Bentham et al.) has no certificate on the wall, so I have some homework to do checking the dates and details of that – it was a long time ago.

Martial arts are about a lot more than physical technique, the suffix “do” on the end of many traditional Japanese martial arts means “way” (as “tao” in Chinese). They usually have a deep culture of mental introspection. I have certainly learned a lot about myself in the last 20/22 years, and a lot about other people, and a lot about human interaction in both physical and non physical spaces. I’ve applied a lot of that learning in many other facets of my life.

A lot of us wrestle with imposter syndrome. I sometimes feel that it’s a good sign to do so. It can be linked to our expectation of “mastery” as a destination, but the concept of do/tao is that mastery is a continuing journey and never a destination. This concept is explored in a lot of detail in George Leonard’s book: “Mastery: The Keys to Success and Long-Term Fulfillment”, and I’d really recommend this book to anyone interested in the challenges of self improvement in any sphere.

Gradings are funny things, and I’ve written more about them elsewhere, they shouldn’t really define us, but they do mark important milestones on our continued journeys and so they are worth remembering and celebrating.